Weds 8/3 Warm AM and breezy PM but only one pic.

It was quite warm on the morning trip when the side was in the sun so we alternated the drifts. First couple of drifts did not produce much so we tried another area and had good drift with lots of action, skates, short and keeper fluke, and a few dogfish, unfortunately it could not be repeated. Jerry Mahoney took the pool with one of his two, imagine that. On the afternoon trip the wind kicked up which made it pleasant but the drift was not straight. We picked at the fish but not fast, With Shawn taking the pool with one of his two. Only one pic came out of Rick who came a close second in the morning. My apologies for the photographer errors. Thanks for looking in. 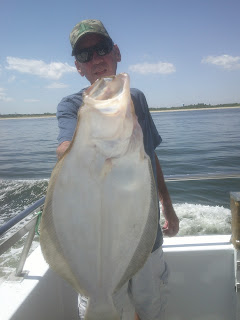